Kevin's career spans more than 20 years in branded consumer foods in both Europe and the United States.

Prior to his role with Burger King, Kevin served as general manager of Yum! Brands (Pizza Hut, KFC and Taco Bell) Europe and Russia Franchise Business Unit based in Switzerland. Earlier in his career he held executive roles with PepsiCo and Mars. 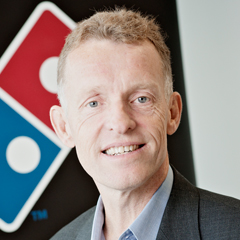 "I found Nurole and its platform very easy to use, and I would use it again. I have recommended a few people for other roles."